In 1991/ 1992, there was so much going on! We had been living in Encinitas California, a beach town in North San Diego and commuting to work at Newport tattoo, a solid hour away! The shop was new, and semi slow. The rainy days were dead. One day Julia came into the shop asking about tattooing as a remedy to cover the scars from blisters as deep as 3rd degree burns, resulting from a 'skin condition'. She's been trying to find a solution to the condition for a very long time and had followed the advice of doctors which only left her with a permanently purplish face from chemical peels and derma-brasions, and the beginnings of "everything going dim" from experimental drugs being tested on her, whose side effects included the "small chance of blindness"!!!

She had tried skin pigment matching done by a 'plastic surgeon'... which left unnatural looking pink dots on her arms, hands and legs.  She felt that she had no choice but to cover the areas with art work. Nothing subtle, there would be themes with mermaids, underwater creatures, cartoons, portraits of family and people who were important in her life, it was to be a full body project. We booked appointments, weekly... she showed up to the first one, then the second one and pretty soon she was consistently getting tattooed 1-3 times a week. Projects like this usually don't materialize into solid work. Sometimes life gets in the way. People may lose jobs, or move, maybe they have kids, or just get lost in the shuffle with re-booking and booking appointments. This one didn't. I started with the legs and we worked our way up. At about 4 - 5 years in, Julia asked if i would tattoo her face. I said, "YES!"

I had known her for that long and knew that she was stable mentally and financially and could handle such and extreme kind of tattoo. In the process of tattooing her we had found that the tattooing formed a type of barrier against the sun, her blistering had become less frequent and was only worse on the hands and face. The disease was cutaneous porpheria. Her liver produced too much iron for her blood and her skin reacted to the sun's UV rays, leaving her with blistering on the skin even after minimal exposure. After the tattooing, she could have more sun, and actually come out more in the daytime and enjoy walking in the sun. She was a walker and was sponsored by Nike shoes... she'd walk distance, huge distances... miles and miles in the inland Irvine heat.

The face tattooing alone took a long time to do. Every part of the face, into the eyelids, lip lines and even the small strip of skin between the nostrils. The healing was weird. Because of so many peels and derma-brasions, sometimes things would heal lighter than normal and would have to be touched up until they healed dark enough.

After 7 and a half years of tattooing her, we had contacted The Guiness Book of World Records to enter her as a nominee for Most Tattooed Woman. We got calls back and soon had the opportunity to appear on Guiness Prime Time, an evening TV show which showcased record holders or people attempting to break current world's records. There was a bowling ball stacker on the set... took him forever to stack 13 balls! We/she had appeared in so many magazines, and publications and the TV shows were countless! Guiness Prime Time, Larry King Live, Fuera de Series (Spain, Mexico and South America), Pro Sieben (Germany), You Asked For it, Ripley's Believe it or not, Mike and Matty Show... Clips were shown on Oprah... it was an incredible time. 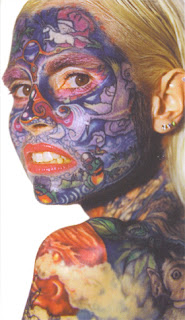 Steve continued tattooing Julia for years after I had moved to Canada. I would see her occasionally on trips to California. There is so much more to tell... she was a very interesting person. Her background did not seem consistent with the type of person she was. She was definitely a black sheep of the family.. one of a kind.

A few years ago, I found out about her passing. We had not expected that to happen to her. She always seemed full of energy. She was always thin and we had speculated among ourselves that she may have had an eating disorder and that was confirmed as the cause of her death.

To have had the chance to tattoo her whole body exclusively was one in a million. Me and Steve worked on her maybe 2-3 times a week 2-4 hours at a time! imagine constantly healing tattoos!

Posted by FUNHOUSE TATTOO BC at 9:58 AM

That poor girl. And I'm not being condescending. She was taken too soon.

ALL ARTISTS' TATTOOS AND OTHER STUFF 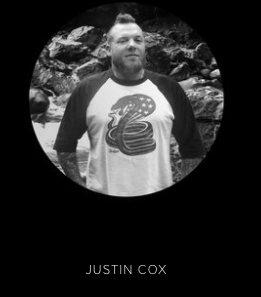 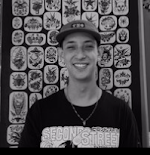 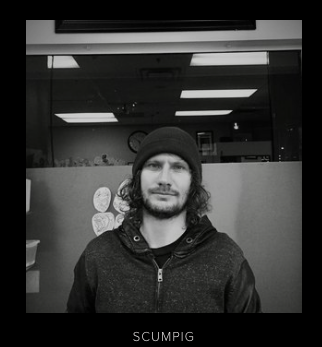 PLEASE CALL OR COME BY TO BOOK OR CONSULT.

HOURS: NOON TIL 7PM. EVERYDAY.
PLEASE CALL OR COME BY.
BOOKING IS QUICKER AND EASIER IN PERSON.
DISCUSSING IDEAS IN PERSON AVOIDS ANY
MISCOMMUNICATION ON DESIGN, TIME, PRICE
ESTIMATE...
WE CHARGE $100 MINIMUM.
WE CHARGE $200.00 PER HOUR.

ABOUT FUNHOUSE - HOW WE WORK

FUNHOUSE
3001 CAMBIE ST. (@ 14TH) VANCOUVER BC
604-879-4114
WE ARE A CUSTOM TATTOO SHOP SPECIALIZING IN EVERY STYLE OF TATTOOING. WE HANDLE ONE OF A KIND CUSTOM PIECES AS WELL AS THE HARDEST OF THE HARD - COVER UPS AND SMALL DETAILED IMAGES WHICH THE REST OF OUR CITY'S SHOPS WILL NOT TOUCH.
THE PROCESS TO PRODUCE THESE PIECES TAKES TIME, SOMETIMES MORE THAN ANTICIPATED, RUNNING BEHIND SCHEDULE, THOUGH RARE, DOES HAPPEN DUE TO THE METICULOUS WAY WE WORK. WE DO NOT RUSH TATTOOS... SO BOOK YOUR APPOINTMENT WHEN YOU DO NOT HAVE STRICT TIME CONSTRAINTS. BOOK YOUR DAY AROUND YOUR TATTOO AND NOT YOUR TATTOO AROUND YOUR DAY.
WALK INS - WE OCCASIONALLY HAVE TIME FOR WALK INS. BEST THING TO DO IS SHOW UP, IF WE HAVE TIME, WE WILL TAKE YOU.
CONSULTATIONS - WILL BE DONE IN PERSON - NOT BY EMAIL. WE DEAL IN SPECIFICS WHICH CAN EASILY GET LOST IN TRANSLATION THRU EMAILS. EMAILING IS LAZY… SO PLEASE COME IN PERSON WITH A CLEAR IDEA OR DIRECTION YOU WANT TO GO. IT MAKES IT EASIER FOR US THAN READING MINDS.
DEPOSITS - WHEN YOU BOOK, PLEASE REALIZE THAT WE TAKE A DEPOSIT TOWARD YOUR TATTOOING, THIS DEPOSIT WILL BE APPLIED TOWARD YOUR FINAL COST / TIME.
IF YOU BOOK AN APPOINTMENT TAKEN OVER THE PHONE BECAUSE YOU LIVE FAR AWAY, PLEASE COME EARLIER THAN THE TIME YOU HAVE BOOKED. IF YOU ARE LATE, WHOEVER IS HERE BEFORE YOU WILL GET THE SPOT. PLEASE BE DECENT AND CALL IF YOU WILL BE LATE.

TATTOO MACHINES AND THEIR SECRETS 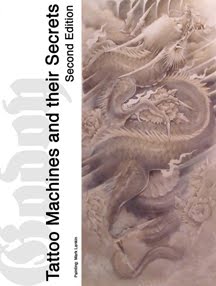 High Res images full details on diagnosing, troubleshooting, specifications, tuning repairing, of the electromagnetic tattoo machine. Paypal $20 to funhousetattooingbc@gmail.com for high res PDF file. When Paypal is received we will send you the files though WETRANSFER 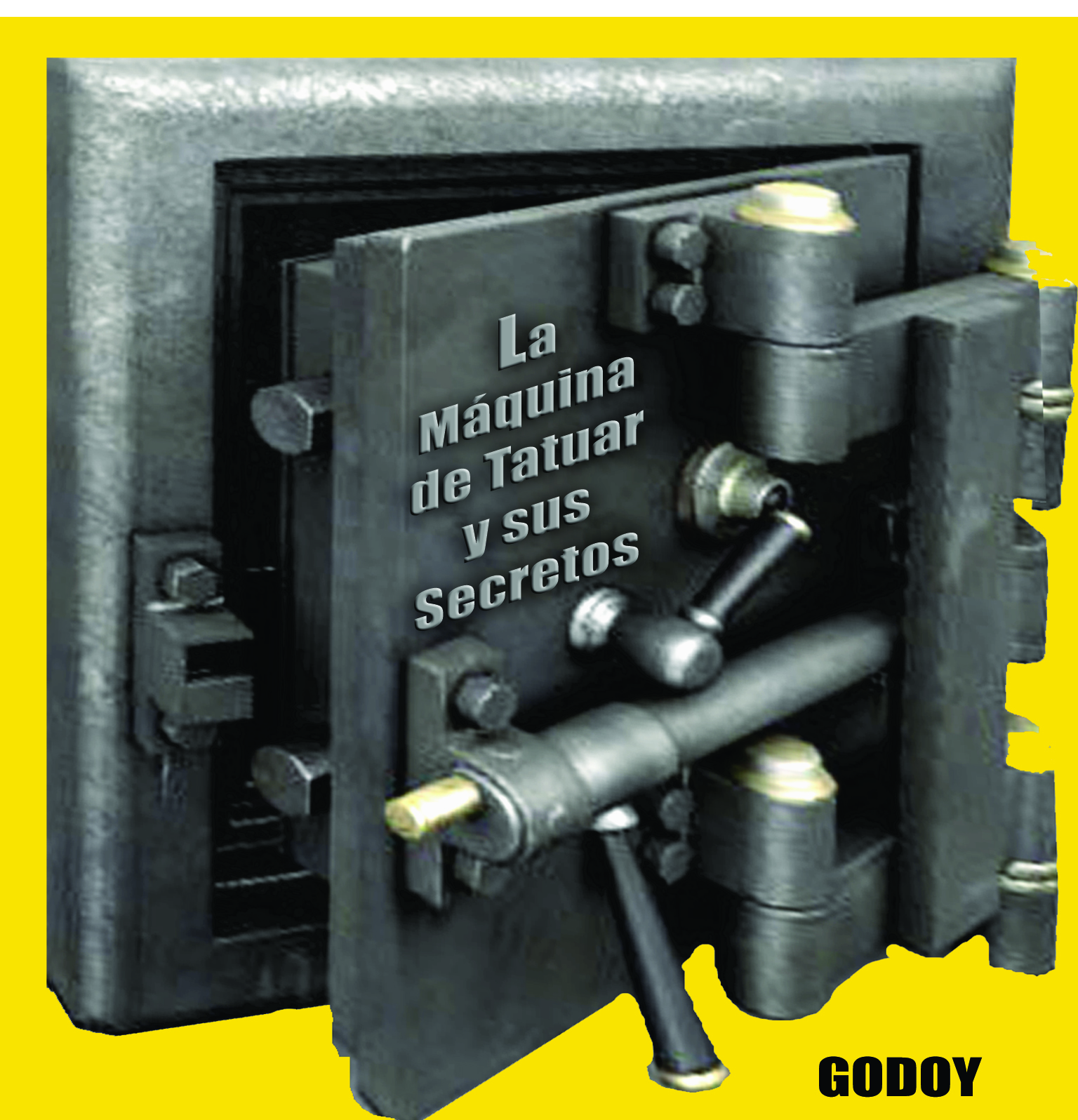 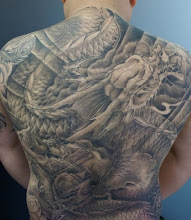 BACK BY MARK LANKIN 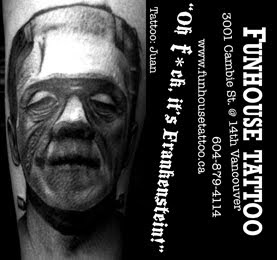 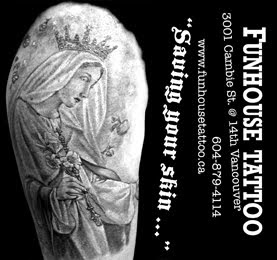